You are here: Home1 / 2 / News & Info3 / GAS TRUCKS PROVE WORSE FOR THE ENVIRONMENT AT A CRITICAL MOMENT

Liquefied natural gas (LNG) for trucks should be kicked out of the EU’s fuel infrastructure targets and attract no subsidies anywhere in the EU. That is the clear conclusion from new research commissioned by T&E, which says only emissions-free trucks like battery electric vehicles should be supported by lawmakers. The research shows that trucks powered by LNG harm the environment far more than manufacturers claim. One of the main reasons is methane emissions.

There are around half a dozen greenhouse gases (GHGs), of which CO2 makes up the majority of atmospheric emissions. As a result, the climate change focus over the past two decades has been mainly on CO2. But a recent report by the IPCC said rapidly reducing methane is crucial to avoiding catastrophic temperature rises. Methane is 84 times more powerful as a GHG than CO2 over a 20-year timeframe, but it lasts much less time in the atmosphere. The potential for reducing global warming by reducing methane emissions is therefore considerable.

This is why T&E is calling for all subsidies for LNG trucks to end, citing the research it commissioned from the Graz University of Technology. It shows high levels of methane from LNG-fuelled trucks. For example, Iveco’s LNG S-Way emits 13.4% more greenhouse gases than its Stralis diesel truck over a 20-year timeframe. 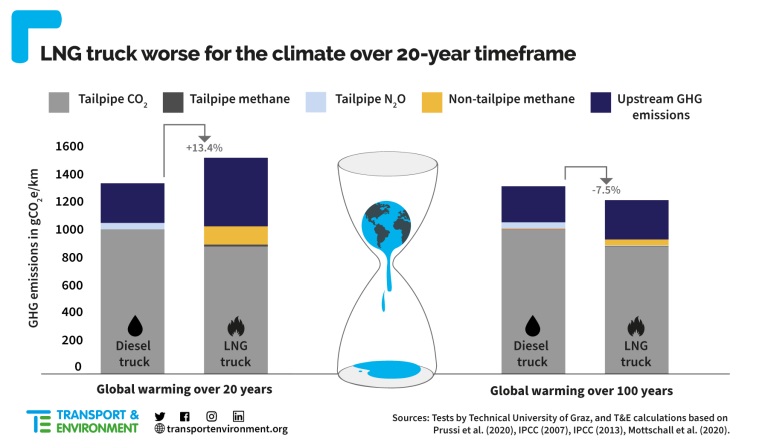 Iveco and the gas industry typically claim gas trucks are cleaner in terms of both climate impact and air pollution, but both claims have been dismantled in the new research. As diesel trucks emit about half as much methane as LNG trucks, the climate impact of LNG vehicles is worse than the diesel over the first 20 years but less over 100 years (albeit just 7.5%). In tests carried out for the research, LNG trucks proved far worse for cancer-causing particle emissions in cities and rural driving, emitting 37 times more particles (PN) than those that are currently measured in official tests.

T&E’s freight manager Fedor Unterlohner said: “The timing of this research is crucial. We cannot wait 100 years for greenhouse gas reductions, we need them in the next 10 years or it is too late. The short-term impact of methane means gas trucks are a dead-end for cutting emissions and will even exacerbate the climate crisis over the period we need to take deep-rooted action.

Ultimately, gas trucks are just another fossil fuel technology that can never clean up freight. It’s time for gas fuelling stations to be dropped from the EU’s infrastructure targets under the Alternative Fuels Infrastructure law, and for governments to stop incentivising LNG trucks. States such as Germany and Italy should also end their fleet renewal and purchase incentives for LNG trucks. Only zero-emission trucks like battery electric vehicles should be supported with state subsidies.”