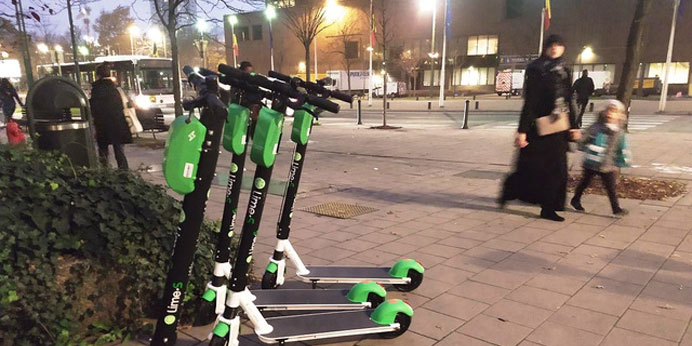 From an environmental point of view, electric scooters have much to recommend them: when people use them, it often means they are not driving cars. That means less pollution and less traffic on the roads. But the spread of app-rented e-scooters, zipping effortlessly through congested streets, has created a whole new set of issues for authorities. As scooter-related accidents surge, and as abandoned scooters scatter the pavements, how do you regulate these newcomers to the transport sector?

This is the challenge cities across Europe are facing as newly-minted scooter companies add to the traffic mix, mingling with cars, trucks, bikes, and even pedestrians.

In cities such as Madrid, Paris, Berlin, Zurich and Brussels, start-ups like Lime, Bird, Bolt, Wind and Flash have been arriving with trucks of scooters, and simply dumping them on pavements. Users simply find, rent and unlock them with a smartphone app. When they are finished, they just leave them, well…, wherever they want. Scooters now litter public places, often blocking pavements.

That’s not to mention the accidents from people riding them, often colliding with pedestrians: they are now adding to the road fatality statistics. There have been the 200 accidents that have occurred in Vienna alone since the introduction of the e-scooter there last October. Tarek Al-Wazir, the Transport Minister for the German state of Hessen, from the Green party, has called them “a stimulus programme for the nation’s accident and emergency surgeons”.

For some cities, this is a repeat of the process they went through last year, when dockless smartphone rental bikes, like China’s O-Bike and Gobee, arrived en masse. They were similarly scattered aimlessly across the streets. But the scooter roll-out is far bigger, as their ease of use makes them much more popular: there is no sweat-inducing pedalling with battery-powered scooters.

City authorities are struggling to deal with the issue, but they are fighting back. Paris has told scooter companies to keep them off pavements or face a temporary ban. The city has already introduced fines for riding trottinettes electrics on the pavement to €135 and will slap €35 fines for users who cause an obstruction by parking on a pavement. Paris Mayor Anne Hidalgo has also demanded a 20km/an hour speed limit streets and 8km/h in pedestrian areas. Meanwhile, France’s Transport Minister Elisabeth Borne announced a nationwide ban on e-scooters on pavements from September.

Britain has been uniquely immune to scooters so far, thanks to its strict road regulations. The Road Traffic Act 1988 means they would have to be insured and number plateed to be ridden on the roads, while the Highways Act 1835 means they cannot be used on pavements. But there are already moves to change these rules.

So, how can scooters be used safely and responsibly? A docking system would address the issue of discarded scooters blocking pavements – even if it requires planning permission, and purchases of expensive city centre land. Paris already plans to build 2,500 scooter parking areas. Lisbon now has enforcement officers around to clear scooters off pavements, imposing a “removal fee” for companies to retrieve them. Information campaigns would do a lot to help improve the quality scooter riding – and pedestrian awareness.

These measures will take time. But the lesson of the scooter roll-out is that transport is changing fast. Authorities need to be nimble and flexible to adapt to the new trends.

How Electric Vehicles Are Changing Our Transport Models
Scroll to top