// Road Haulage Association believes there is a shortfall of about 60,000 haulage drivers in the UK 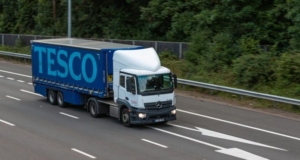 Tesco is offering a £1000 joining bonus to lorry drivers who join the Big 4 grocer before the end of September amid staffing pressures on the UK’s supermarkets.

The payment, which applies to new starters who join from July 14 until September 30, appears on various advertisements for HGV driver roles on the retail giant’s website.

Potential candidates are told that the role offers the opportunity to be “an ambassador on our roads” where “you’ll play a vital role for our customers and communities, representing Tesco on the highways and byways of the UK”.

The time-limited offer comes after supermarkets had to reassure customers last week that there was no need to panic-buy following pictures of half-empty shelves and reports of temporary shortages.

A “perfect storm” of aggravating factors was blamed for the situation, including self-isolating workers and prior staff shortages brought about by Brexit and the Covid-19 pandemic.

Last week the BRC warned that staff shortages, caused by large numbers of workers self-isolating after being pinged by the NHS Covid-19 app, was “putting increasing pressure on retailers’ ability to maintain opening hours and keep shelves stocked”.

The impact of the so-called “pandemic” was also being seen in factories, bakeries and meat processing plants.

The UK Government has since introduced emergency measures which it says will protect food supplies, allowing thousands of workers to avoid the need to self-isolate if identified as a contact of a Covid case.

Critical workplaces in the food supply chain are being prioritised for targeted daily testing, which will allow eligible workers identified as Covid contacts to continue working if they test negative.

Meanwhile, the Road Haulage Association previously said it believes there is a shortfall of about 60,000 haulage drivers in the UK after around 30,000 HGV driving tests did not take place last year due to the coronavirus pandemic.

Hauliers blamed the shortage on a large proportion of drivers being foreign nationals from European countries who had returned to the EU amid Brexit changes, combined with truck drivers not being included on the government’s list of skilled labour, leaving new arrivals needing immigration paperwork.

Tesco previously assured shoppers it had plenty of food and all grocers urged customers to shop as normal.