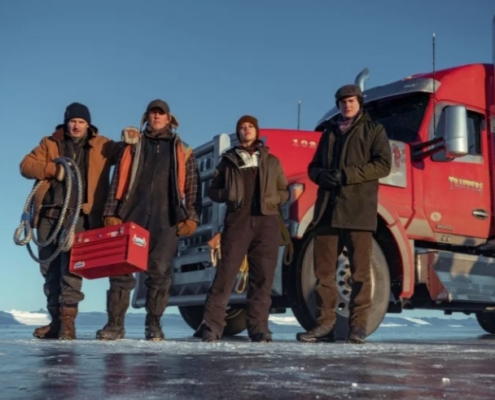 Let’s get this straight right from the jump, The Ice Road, this summer’s big action thriller streaming on Netflix, is not a feature-length version of the smash-hit reality TV show, Ice Road Truckers. Not even close, and that’s rather too bad.

That being said, the streamer starring grumpy action star Liam Neeson at his 69-year-old grumpiest, is an hour and 47 minutes worth of action in a film that’s an hour and 48 minutes long. The Ice Road is entertaining and wildly suitable to watch while parked at a truck stop after a day of driving. But, watch it with a grain of salt. The Ice Road is fictionalized entertainment. Period. Keep that in mind when you get tempted to dissect how Neeson and his costars (Lawrence Fishburne and Amber Midthunder) drive their Kenworths across the frozen lakes on a time-sensitive rescue mission. And, cut Marcus Thomas some slack as Neeson’s brother, a skilled mechanic suffering from PTSD and aphasia.

With your disbelief — and skilled truck driver knowledge — willingly suspended, it’s possible to enjoy The Ice Road and not feel it betrays the professional fraternity/sorority that is North American trucking.

VW, Daimler, Volvo team up to build truck chargers in the EU, USA and CAN