VW, Daimler, Volvo team up to build truck chargers in the EU, USA and CAN 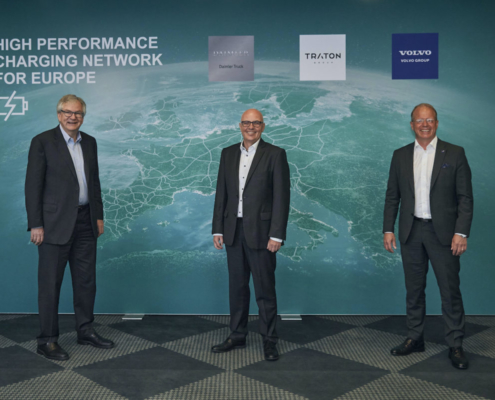 Three of the big four global truck manufacturers have come together to sign an agreement to develop a comprehensive electric charging system, initially in Europe and following in North America.

The truck manufacturing units of Volkswagen, Daimler and Volvo announced Monday (5 July) they will team up to build a network of 1,700 charging points for heavy-duty vehicles in Europe using green electricity.

The high-performance charging stations will use electricity from renewable sources and be located close to highways as well as at logistic and destination points. They will also be open to all brands of commercial vehicles.

The project will be managed by a joint venture that is planned to begin operations next year.

The companies said they hope the project “will act as catalyst and enabler for realising the European Union’s Green Deal for a carbon-neutral freight transportation by 2050 – both by providing the necessary infrastructure and targeting for green energy at the charging points.”

The Daimler Truck, the Traton Group and Volvo Group represent a majority proportion of the trucks manufactured across the globe.

The three players are also heavily involved in the US truck market since Traton finalised its takeover of International Trucks earlier this month. Reports suggest a similar JV in North America will be announced relatively soon.

UK – Working hours rules to be relaxed to ease the professional truck...

The Ice Road
Scroll to top